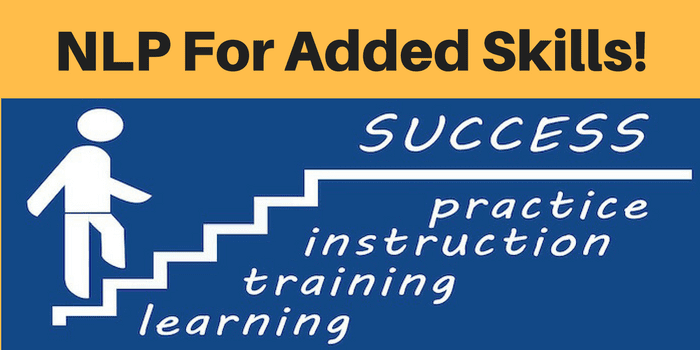 “Without added skills, your only chance of success is if you buy the winning lottery ticket because, at this rate, you’ll be dead broke within two years.”

Most of us in the small group laughed when Jim, my accountant friend, ended his story with that line. But it wasn’t funny for everyone, and it may not be funny for you.

As NLP Trainers, Ronda and I are very aware of the need for added skills in your professional development.

We continue to see good people fail and then blame current events on their lack of ability. Abilities that could have easily been enhanced by taking our NLP Training Online for Added Skills development.

And it’s because too many people rely on hope and optimism for their success. And, being human, they are creatures of habit, so they just continue to do the same thing year after year.

I don’t like seeing people fail, so I’m going to give you a wake-up shake and tell you to start paying attention to these startling facts about the future.

There is a 95% chance that you won’t be a success.

It’s true; the percentages are not on your side and especially not if your added skills level is zero.

And what’s worse, if you are in the 95% group, and let’s face it, odds are you are, then what I’m about to say won’t make any difference anyway.

Because your success level is already decided.

These Statistics Prove It

According to data from the Social Security Administration …

Select any hundred people, with no biases, at the start of their working careers, and follow them for 40 years until they reach retirement age; here’s what you’ll find:

The first two groups, 1 wealthy, 4 financially secure, add up to 5%.

Now, compare that first group, those being successful, with the last three groups (95% of the population) who will be failures.

My Prediction? You’re In The 95% Group

No offence, but predicting you are in the 95% group is easy. And I’ll be correct 95% of the time!

Pretty good odds if I were at the casino or buying lottery tickets.

And here’s another kicker. If you’re in the 95% group that will fail, chances are you will stay in the 95% group. Otherwise, the 95% wouldn’t be so predictable, would it?

Unfortunately, a part of you agrees with me and believes that you don’t have what it takes to succeed. You’re wrong, of course, but it’s for that very reason that so few people become a success – They Don’t Believe They Can!

It Gets Worse: Without Added Skills

Of course, you can change your belief. However, you probably won’t, because if you’re a true 95 percenter, you won’t believe or consider that you need added skills for your development.

And just thinking you can be successful does not have the same powerful effect as genuinely believing it.

Are you starting to see the spot you’re in? You’re between a rock and a hard place, as the saying goes.

Added Skills Plus This Important Thing

To be in demand, you need added skills; we give you that. But you will also need one other important thing. And that is, you must genuinely believe. And, yes, that’s built into our training too.

Because when you genuinely believe you can accomplish anything, nothing can stop you. How could it?

When things are that certain in your mind, you go looking for and find ways to get whatever is necessary. Things like added skills. Skills like our NLP Training Online. (if you’re going to get added skills, you might as well get the best skills)

Whereas, when you just think something, without really believing, then sooner or later it leads to thoughts of failure, giving up, what’s the use. And that’s followed by reasons you can’t or won’t because it obviously has some attachment to your past or background somehow.

As you think of it now, are you aware of having different thoughts about them?

My bet is you absolutely (at a deeper level) believed in the one where you were successful. And you didn’t have that same belief when you weren’t successful. (Remember, I have a 95% chance of being right!)

There are 2 positive takeaways here, but 1 is only for those of you destined for the 5% group.

And don’t blame me. It’s not my fault if you’re in the 95% group. I didn’t create these numbers. As I stated in the beginning, this is data from the Social Security Administration.

So here are your takeaways …

First is the fact that it proves my point about how solid and absolute beliefs are.

And second, for the real 5%, this knowledge gives you another link in your chain of success.

Because, as a true 5 percenter, you are always looking for knowledge that will help you achieve. You want added skills to become even more successful.

Success-driven people believe they will experience success, so they simply look for ways to get there.

And it’s guaranteed they improve themselves with added skills.

Especially when you take our NLP Training Online. Because it gives you the ability to quickly change the beliefs that are holding you back.

And because changing beliefs about yourself and your place in the world are ultra-important, then it’s essential to get it right.

Because your future success also depends on your future health and well-being, you don’t want to create beliefs that can hurt you over time.

That can be as bad or worse than not having a belief that you can have success.

You will not reach success through chants trying to convince yourself, “I think I can, I think I can.” That just doesn’t work, and 95% prove it.

You’ll just end up frustrated and tired like those in the 95% group who stand around muttering emphatically – that won’t work!

But on the other hand, if you’re in the Successful 5%, you’ll want every advantage helping you stay there. Because you never know when one of those 95%ers might actually succeed and slip into your group, bumping you out.

And the best advantage you can have is our Life Potential System NLP Training Online for added skills.